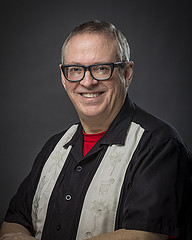 Ken Steacy decided at age eleven to become a professional comic book author/illustrator, a dream he realized in 1974. Since then, he has worked in the industry as writer, artist, art director, editor, and publisher, chronicling the exploits of Astro Boy, Spider-Man, Harry Potter, and the Star Wars gang, to name but a few. In addition to creating his own intellectual property, he has also collaborated with other writers, including Harlan Ellison and Douglas Coupland.

Ken is a recipient of an Eisner and an Inkpot award, and in 2009 was inducted into the Joe Shuster Hall of Fame, a lifetime achievement award honouring Canadian comic book creators for their contributions to the industry. He currently teaches Comics & Graphic Novels at Camosun College in Victoria BC, a visual storytelling program he co-created with his wife, author/illustrator Joan Steacy.